My Dog’s a Nuisance 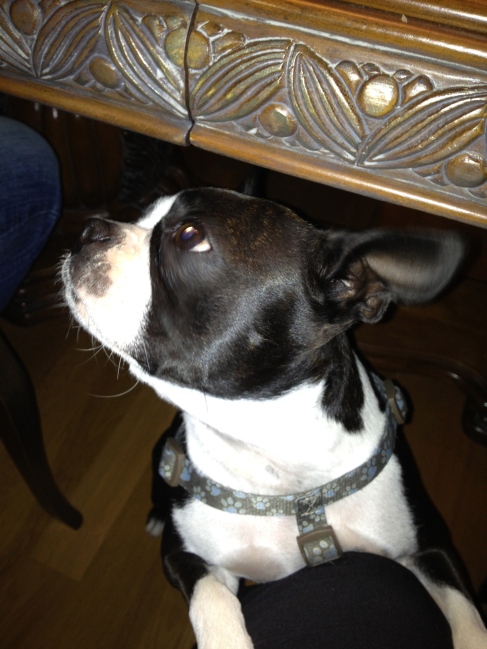 My dog is a nuisance, an absolute pest.

With her in the house, there is truly no rest.

She buries her bones under bushes and trees;

She begs at the table and scatters her fleas.

She flattens my pillow and sleeps on my bed.

I awaken at night with her nose on my head.

She runs us in circles; I’m getting worn out.

I won’t be a slave for this flat-nosed little sprout!

Errr, pardon, excuse me? But what did you say?

You ask if I’m giving my puppy away?

You’ve the nerve to suggest you’ll take her with pleasure.

Why, certainly not! She’s an absolute treasure!

This is adapted from another of those old poems that my mom cut out of the local newspaper back in 1938 and pasted to a piece of cardboard that she tacked to the inside of her kitchen cupboard door.  We always had dogs when I was a kid growing up. The first one, Teddy, a fox terrier, was a house pet. None of them after him were allowed in the house. I think it was because we moved out to the country and the dogs got too dirty. I could hardly wait when Bob & I were married to get an indoor dog that I could cuddle the way I used to sleep with Teddy. Terriers are perfect indoor pets. Not too big, very little shedding, playful, and lovable. Our TazE is named for that little bit of devil in her – and E – for the big ears. When she was a pup the ears were just about all you saw! Since then she’s grown into them somewhat, but true to her Boston Terrier nature, they still are very prominent. (The better to hear you with, my dear!) She doesn’t have fleas – that was just a part of the whimsical poem – and she doesn’t bury bones, but she does occasionally beg at the table (I don’t reward it, but guests sometimes will give her scraps before I catch them!). She does run us in circles – and chases the bunnies that live under our porch. The antelope and deer know better than to come into our yard space, too. She’s a handy little guardian!

But no, I’m not giving my little nuisance away!