My blog’s subtitle is “Love One Another.” I have not seen a story that exemplifies this concept quite like Tim Harris’ story written by Andrea Kelly and videotaped on http://www.thehandwrittenlife.wordpress.com/2013/03/18/inspirational-monday-2/

Check it out and be prepared to give a high-five and a hug to the next person you see. Oh ya!!!!!

Shane Koyczan is an amazing young man with a story to tell to the world… a story that will forever change how you hear the word “Bullied” and how you see the meaning of “Beautiful.” Click on the link. Take time to hear and watch him. You’ll want to share it, too.

I belong to the Madison Valley Writers’ Group. We meet every first and third Friday at our local bank’s “Fireside Room” and share our creative efforts with one another. The hour and a half together begins with a writing prompt. It’s a topic we draw from a hat. Any member can anonymously add topics to the hat anytime. The topics are varied – some serious, some silly. Most lend themselves to whatever genre the writer wishes to engage.

For the first fifteen minutes or so, as members gather, we write using a new prompt each meeting. Then we share with one another what we wrote (with the option to “pass” if we wish). My last post titled, “Touch,” was one of the creations from last week’s prompt, “Things That Stimulate Your Sense of Touch.” Another of our members wrote about the itchy feeling of a wool hat – and how much better it feels if it is fur-lined. One member took the topic a step farther and wrote about the effects of touch – i.e. what happens when you touch someone else’s wallet (a fat lip), or what happens if you touch a rattle snake’s tongue (venom). My first poem was short and quick and left me with time to contemplate another kind of touch – not someone touching my cheek or my lips, my heartstrings or my spirit – but the sensation of the soft skin of a baby touching me. Here’s what I wrote:

The sense of touch is vital
For a baby to thrive and grow.
Babies soon would wither
If love’s touch they never know.
So, as much as I need them,
I know they need me just as much.
There’s nothing in the world
That compares with a baby’s touch.

I have a friend who had a stroke a couple of years ago. One of the residual effects of her stroke is an “Invisible bubble” around her that defines her “space.” She doesn’t allow others to invade that territory. She doesn’t shake hands – let alone greet her friends with a warm hug the way she used to. She sends off very clear vibes that say, “Stand clear. Don’t come too near.” Do you have an invisible bubble around your personal space? Know anyone like that? How does it feel? Do you think a baby’s touch could permeate that bubble? There’s something so vulnerable, soft, defenseless, and harmless about an infant’s touch.

If only every human touch could be as soft and harmless! Let’s work on that together. There’s nothing in the world like the touch of someone who genuinely loves and trusts you. Let’s foster that kind of world. Touch my world – and I’ll touch yours…

Touch my fingers,
Touch my nose,
Grab my ankles,
Touch my toes.
Touch my lips,
Kiss my cheek,
Touch my heartstrings,
Make me weak.
Touch my feelings,
Feel my heart,
Touch my words,
That’s a start.
Touch my meaning,
Know it’s me,
Touch my spirit,
Set me free! 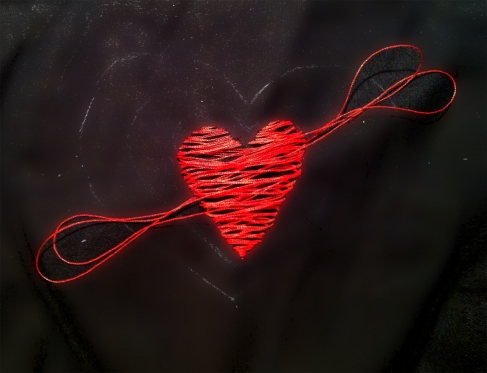 Sometimes when I pause

I hear the earth breathe –

I feel the breath of God

In the rustle of the trees.

Sometimes in the silence

God speaks to my longing soul.

In the stillness, is my goal.

Sometimes in the quiet

God reaches from above.

With fingers long and gentle,

God touches me with love.

I know God’s always near.

So, in the silence, listen –

God whispers, be still and hear.

When I pause, God whispers.

I hear God when I’m still.

In the silence, listen –

Then heed and do God’s will.

My friend, Gina, at ProfessionsforPeace.com has hit the nail on the head – again!   Click and see.