I am writing a book. I think I told you that in my first blog this year, the “I’m Back!” message. The chapters each are dedicated to one of my seven grandchildren. Working title, “Lessons I Am Learning from My Grandchildren.” A few nights ago, after working the afternoon on the chapter about my grandson, Sam, who is a 24-year-old special needs sweetheart, he showed up in my dream. It was so vivid! He was playing the guitar (Sam doesn’t play the guitar) and singing to his mother (Sam doesn’t sing!). In my dream, he sang and played beautifully! I got up, grabbed a pen and paper and immediately wrote the words before I would forget. What you have to know before reading Sam’s Song is that our son and his wife adopted Sam and his sister, Hope, at age 4 1/2. She was two-years-old at the time. Neither of them spoke. Well, Sam had about 10 words… half of them English and half Spanish. No, si, bano, frio, hot… you get the idea. They were rescued from a river bank. Their parents had abandoned them. After nearly two years in various Foster Care placements (the last being a Spanish-speaking home), they joined our family. Sam’s attribute that distinguishes him as my special grandson, and the lesson I am learning most from him is “Compassion.” Read his song and see into his heart!

Thanks for takin’ me in,

Believin’ in me, and

When nobody else would,

Nobody else would do.

I was battered and torn,

Beat down by the world,

Lower than a slug in the sand.

Couldn’t find my own way,

Couldn’t have my own say,

Didn’t know how to make a demand.

You saw through to the me –

Scared, shut up, trapped me,

A lost soul caught wordless inside.

You brought hope to my life,

Saw God’s love in my eyes,

Opened up what was meant when I cried.

Thanks for takin’ me in,

Believin’ in me, and

When nobody else would,

Nobody else would do.

Here is Sam with us: Grammy & Grampy on his high school graduation day.

He was home-schooled all 13 years. His Mom, Monika, did a terrific job! 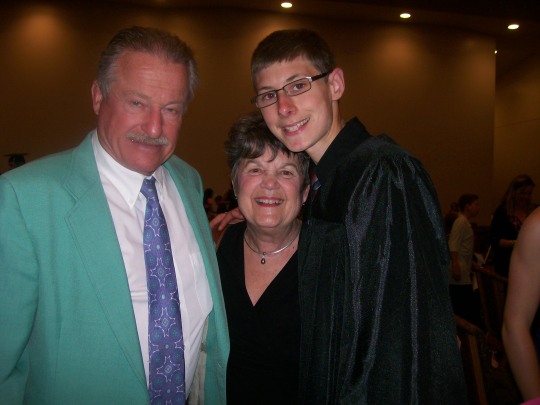 I am excited to be taking an eight week writers’ workshop. It started last week with five of us ladies signed up to work with an amazing young woman named Allyson Adams. My friend, Lexi Sundell and I are trading off the driving responsibility. It’s about fifteen miles up the hill to Virginia City from where we live here in Ennis, Montana. A lovely drive, usually, but it snowed big time last week when it was Lexi’s turn to drive. I lucked out and had a gorgeous spring day yesterday when it was my turn to drive. Sharing the driving has the added bonus of quality one-on-one sharing with a fellow writer as we traverse the mountain and exchange ideas on what we’ve been writing or what we just learned and intend to do with it. Lexi is writing her memoirs. I am writing a book to honor my seven grandchildren (and ultimately their parents, too, I hope) and to share the wisdom my grandchildren are helping me gain on this amazing path called LIFE. Our goal is to start and finish this project in the eight-weeks of the workshop. Ambitious? Maybe. Lexi had a head start. She began her memoirs some time ago. My book is evolving as the class progresses.

The working title of my book is “Lessons My Grandchildren Are Teaching Me.” It started out in the past tense… Lessons I Have Learned… and has changed to the present as it dawned on me that the learning is an on-going, life-long process. The grandchildren, who all are now between the ages of 20 and 24, live in California and Switzerland, except for one. One is right here in Ennis. She moved here a year ago, coming to live with Grammy and Grampy for a much needed “fresh start.” Her name is Hope, and she has been the initial inspiration for this book project that is now consuming me. She also is one of the reasons that I stopped blogging about a year ago. Life got in the way! Something had to give as we focused our energies on being sorta parents again at the ripe, rich age of mid-seventies! So, I set aside WordPress and dug into helping a grandchild grow from 21 going on 12 to a bonafide young adult, capable of wise decision making, independent living, and being the responsible citizen she is becoming. We all are a work in progress. I am no exception!

It’s been a challenging year. Sharing the love of family, the joy of giving, the recognition and development of our spiritual gifts, and the confidence to grow from our mistakes and go on to make new ones and learn from them, too, has been an amazing experience. Our Hope has evolved from a beat down, introverted, jobless and homeless child to a confident, outgoing, employed and independent young woman. Her 22nd birthday is Mother’s Day. We’re going to celebrate with her and we’re here to continue the love and support and watch as she continues to make great strides. Hers will be the last chapter in my book. Hope for Hope! Stay tuned!

(Here is Hope – in yellow –  at about age 17 – with her siblings – before she decided she was tired of family rules and decided to go it on her own. Two years later, she was ready for her “Fresh Start.” And the story continues… My book is about these four PLUS my three grandsons who live in Switzerland. I’ll tell you more about my project in my next entry. Thanks for visiting.)

About a year ago I stopped writing in WordPress. My email account associated with it was full and overflowing. The task of keeping up overwhelmed me. Something had to give. So, I just stopped blogging. It’s been a good reprieve.

Then, about a month ago I flew home to Montana from a family reunion in California and brought a cold virus with me. It turned into pneumonia and threw me for a nose dive! I was so zonked by it that whole days went by in my pajamas, too drained to get out of bed or off the couch! I had way too much time to think. My husband got the bug from me. The only difference between my pneumonia and his “walking pneumonia ” was that he was too stubborn to lie down! As soon as he felt better, he went skiing. Relapse! He spent a couple days in his pj’s, too. Then when he felt better, he went skiing again. After the second relapse, he gave himself a week before he was on a ladder, painting the eaves. I gave myself the full month … in fact it’s been five weeks. Finally, I am better. I feel like I am going to survive! God bless the friends who brought food, called, prayed, visited, shopped for me, found good books to keep me entertained and still, and sent cards of encouragement! I am so grateful.

During this time of forced rest, I had time to think. Time to evaluate my life. Time to reprioritize. Time to read one of my favorite WordPress bloggers, Janet Riehl, order and savor her newest book, Sightlines, and time to be inspired by her insights and talents enough to sign up for an eight-week Writers’ Workshop. I’m back! I’m committed to starting a writing project and finishing it. I’m ready to rejoin the world of the living and make my voice heard.